Franz Liszt was born in Western Hungary on 22 October 1811. His native village, Doborján (or Raiding in German), belongs today to Austria. Both of his parents — Adam (1776-1827), an employee in charge of sheep farming of Hungary’s richest and most powerful magnate Prince Miklós Esterházy, and Maria Anna Lager (1788-1866), orphan to an Austrian master baker — were of German origin. 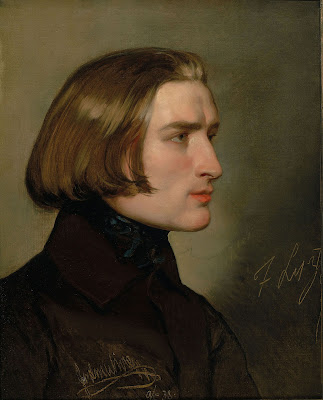 At the time, the whole of Hungary belonged to Austria. Since 1687 and the expulsion of the Turks, the Habsburg Emperors of Austria were the crowned kings of Hungary. The official language was German, and the people of higher classes could not speak Hungarian. Neither did a large number of people who lived like the Liszts on the western border of the country near Austria. The legitimization of the Hungarian language and national culture was to be one of the main aims of the so-called Reform period in the coming decades. It was quite natural, therefore, that Liszt could not speak Hungarian and did not take lessons in this Finno-Ugric language — very different from the Indo-Germanic ones — before he returned to Hungary later in life. Nonetheless, he always declared himself to be a Hungarian, and this was evident for his father and mother as well.
His parents, especially Adam who had not been able to become a career musician himself, were delighted to notice that their only child was undoubtedly a prodigy. The young Liszt possessed an extraordinary musical talent, playing the piano, sight-reading, and improvising in a most brilliant way at an early age. He progressed at a phenomenal speed, leading Adam, his first teacher, to show his fragile son off, fascinating all acquaintances and relatives who heard him. In 1819 Adam took his son to Vienna—at the moment the music center of Europe where Ludwig van Beethoven and Franz Schubert were still living. Liszt’s father presented the boy to the famous piano teacher and Beethoven pupil, Carl Czerny, who was much impressed. As a result Adam decided to go to Vienna so that his son would have the opportunity to study with the best teachers. Since Prince Esterházy was not willing to give Adam a job in Vienna, he asked for a year’s leave of absence and moved there with his wife Anna and Franz in the spring of 1822. Before leaving, the child gave some concerts in the nearest towns of his native land, Sopron (Odenburg) and Pozsony (Pressburg or today, Bratislava, Slovakia).
In Vienna, the capital of the despotic, art-detesting Emperor Francis I , the Liszt family, without any income, had serious financial problems. Fortunately, Czerny and an ageing Antonio Salieri, Liszt’s music theory teacher, undertook the brilliant boy’s training without charge. As Liszt’s name became known, he played in various private palaces, and from 1 December 1822 performed several times in public with great success.
His ambitious father wanted his son to continue his studies at the Conservatoire in Paris so that he might become a celebrated artist with a brilliant career in Paris and London, as he himself would have liked to have done. Adam likely anticipated considerable earnings in Western Europe as well. Consequently, he requested that Prince Esterházy extend his leave of absence for two more years, but the prince refused. Adam, therefore, had to make a serious final decision: he would either give up his home and all kind of safe harbour or sell everything he possessed. The example of Leopold and Wolfgang Amadeus Mozart who, five or six decades earlier, had toured Western Europe was still vivid at the time and most certainly a contributing factor to Adam’s decision. Before leaving the Austrian Empire he received permission from Prince Esterházy to allow Franz perform in Pest, capital of Hungary. Before his first concert on 1 May 1823 in the Hotel of the Seven Electors, Adam, in the name of his son, announced the event in German: ” I am a Hungarian, and I know of no greater joy than to respectfully present to my dear mother country before my departure to France and England the first fruits of my education and training, as the first offering of the most intimate affection.”