Liszt’s music remain orientated upon the one inflexible fact in a life that contained so many contrary forces, so many attempts and experiments in the art of composition—the fact that Liszt was primarily a player. He is moulded from first to last in his achievements as a composer by this dominant circumstance, and even when he seems to have escaped its influence it is still fundamentally the basis of both his strengths and weaknesses. 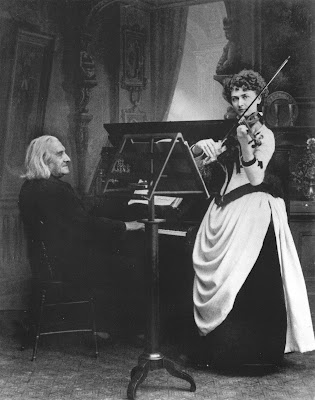 In treating of the nature of his compositions consideration must first be given to his unique music of virtuosity, music that is not only unique in style but supreme in quality. It is relentless, brutal in its demands upon the player, but he who can perform it is master of his instrument.
In the Etudes d’exe’cution transcendante and in certain of the concert studies and other virtuoso pieces, Liszt has created music that explores the capabilities of the piano to the farthest limits and taxes to the utmost the physique and endurance of the executant. An almost superhuman control of intricate passages of chords, octaves and double notes is called for; wide skips must be taken with nearly the same speed that is expected in passages which lie under the hand; in short the player must have a technique approximating to Liszt’s own , for the display of which this music was written.
As music it may legitimately be adversely criticized as being composed too much for himself, as being in fact music which in performance becomes to a great extent merely a vehicle for the pianist’s glorification. It is, however, not devoid of poetry, and of its kind it remains unrivalled in its supreme virtuosity, subduing all but the greatest players.
Secondly there is the music of extemporization, which enigmatic art is practised in two distinct ways. The first way is for effect, formerly much used by soloists in the cadenzas of concertos and similiar passages, but now only performed by such organists as Marcel Dupre and Jeanne Demessieux, who ask for themes in sealed envelopes and from them evolve in a few moments glorious fantasies which usually conclude with intricate and brilliant fugues. Though this art remains of its nature to a great extent shrouded in mystery, yet one supposes that there probably is a certain measure of preparation as to the various possible schemes, and certainly as to the construction of the rapid passage work—the kind of thing that could be adapted to almost any situation. This was, of course, the style first taught by Czerny to the young Liszt. The second type is that done purely for expression. In the main this kind of playing would be performed in private or before a small group of friends, and it has been at all times used by composers for the development of their powers of invention. It is the real art of the instantaneous transforming of the musician’s thought into sound, for the music seems to flow from the fingers in a magic stream. It is possible that Liszt’s fluency in this personal mode of expression may have been influenced by the fact that he first learnt the more calculated type, but it is certain that he freely applied both forms to the art of composition.
The third point that derives from the fact that Liszt is basically a player is his lack of proper technical training in composition and in particular in the branch of counterpoint. This is a vital point in the appraisal of his music, for it is the reason he so often fails in the putting together of the smaller units of a composition. He can write many lovely themes, themes that are full of his individuality and thought, but he cannot build from them satisfactory musical phrases. Only too often he cannot make them coalesce into a consistent musical design. With regard to the broader plans for whole movements he is not at a loss, for he relies upon the new forms that were part of the romantic movement and would not in any case have followed classical principles. It is difficult, however, to dispense entirely with the classical bases of form in any extended music that does not have words. I n practice he is dependent either upon maintaining a rhapsodic flow of thought so that the piece achieves a lyric wholeness and harmony in its constituent parts (this of course is most practicable in short pieces), or on founding the construction upon other than purely musical bases.

LISZT’S PART IN THE ROMANTIC MOVEMENT

Though Liszt was primarily a player, he was also an experimenter of genius in composition and the first of his innovations lay in relation to the romantic movement. The essence of this movement in music has been elegantly described by Dannreuther as the change from the ‘formal to the characteristic,’ and was the outcome of the fusion of poetry with the art of pure music. There are many different approaches to this art style which is always eager and impetuous and calls upon the listener’s imagination, and no two composers have taken quite the same direction. Liszt is regarded justly as being, with Berlioz, one of the instigators of the branch of romantic music known as programme music, and he was in fact the inventor of the symphonic poem.
Much of Liszt’s music, however, may not properly be called p re gramme music, and it is best to divide his output into two classes. The first (which is programme music) includes his two symphonies and his symphonic poems, and is a direct evocation of what may be called a verbal picture or image. His own ideal was the revitalizing of music by infusing into it a poetic spirit. This never becomes a real illustration of a story by music and thus is not so-called imitative programme music, but rather the suggestion or evocation of a mood. There are instances where the music is derived directly from a story. In these cases the programme is clearly defined, and to aid the performer he has sometimes written in the score (for example, in Die Ideale) certain lines from the poem upon which the music is based.
The second class of Liszt’s music is in the typical romantic style and has only the title to suggest the source of inspiration. This section includes almost all his shorter pieces, and though very little of it is abstract music, it is better classed simply as ‘romantic music’ for to group it under the heading ‘programme’ is to imply a degree of literary basis that is not, in fact, there.

FIRST EXPERIMENTS IN FORM AND HARMONY

Liszt occupied himself with the problems of form, which were an essential part of the new style of music, mainly during his first Weimar period, though he had begun before this. The influence of Carolyne von Sayn Wittgenstein was strong in all his musical activities at this time, and it is probable that her opinions were often allowed to influence his composition. With the majority of the symphonic poems and the Dante Symphony the broad features of the design are related to the story. With the Faust Symphony and certain of the symphonic poems (such as Hamlet) it becomes more the portrayal of the contrasting characters by musical symbolism. He used the Leitmotiv in much the same way as did Berlioz.
A device with which Liszt experimented much was that of the transformation of themes. Unfortunately this artifice by its nature is clearer to the composer than to the listener, so that its meaning is too often lost. Whether it produces any effect of unifying the music is very doubtful, and certainly instances of its successful employment are rare.
Liszt always experimented freely with harmony. The fluency with which his fingers found new progressions at the piano often led him to try new chords and cadences. This experimenting was, however, rendesed dangerous because, owing possibly to the great amount of chromatic technical exercises he had practised during his formative years, his ear for the niceties of balance in the use of dissonance was not always sure. Experiment in dissonance calls for a wonderful gift of the creative spirit, so that the mutual balance of the vibrations may be instinctively felt and stability attained. Liszt’s lack of sensitivity in this matter often caused him to fall into errors of judgment, and his ever-searching mentality would tolerate unusual clashes and novel harmonies which some of his friends found abominations of ugliness and deliberate crudities. In general all the Weimar music is frankly experimental; inevitably much of it does not succeed.